The Underground City of Kaymakli in Turkey

The Underground City of Kaymakli is perhaps one of the largest underground establishments located in Cappadocia in the region of Anatolia in Turkey. Many tourists who spend their vacations in Turkey
are usually keen to explore Cappadocia and its marvelous historical and natural sites.

Included in the UNESCO World Heritage Sites, the Underground city of Kaymakli was founded more than 5000 years ago during the 30 th century BC in what is named the sanctuary of Kaymakli.
The main reason why this marvelous big city was founded under the ground is because of the volcanic nature of the area. The inhabitants built these cities to resort to in cases of emergencies. They also dig tunnels to connect each city with the other in a fascinating unparalleled
phenomenon.

These establishments were also used by the Christians around the 4 th and the 5 th centuries to escape the brutality of the Romans who were against Christianity. Today, a visit to the underground city of Kaymakli is included in several travel packages to Turkey. 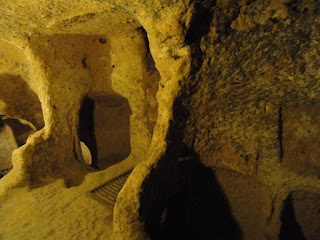 Posted by Right Travel at 3:01 PM No comments: