The Most Interesting Sites of Delhi


Delhi is one of the most magnificent cities of the whole world. Serving as the capital and the seat of the government for more than hundreds of years gave the city its own type of magic.

There are several or perhaps tens of places to be explore and many activities to be carried out in Delhi. However, today, we would be highlighting some of the most charming that tourists who spend their holidays in India should never miss.

The Red Fort of Delhi is one of the most important historical sites of the city. Built around the middle of the 17 th century, the Red Fort was constructed by Shah Jahan, the builder of the magnificent Taj Mahal.

Another impressive historical site is the Mosque of Jama which is one of the biggest mosques in India and the whole world. Constructed in 1656 by Shah Jahan, the mosque can host up to 25,000 people. It is featured with its decorations, minarets, and various ornaments.

There is also the Gate of India that was built by Indian soldiers during World War I. This is another landmark of Delhi that travelers would explore during their vacations in India. 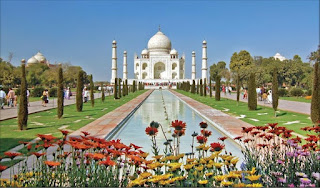 Posted by Right Travel at 2:37 PM No comments: