The City of Salamanca in Spain

Located in the Western section of Spain, Salamanca is located over many mountains, the ancient town inside the city was included in the UNESCO World Heritage Sites in 1988 for its marvelous historical sites.

Established more than 2500 years, Salamanca became a Roman town, the same as many places around Europe, during the 3 rd century BC. Afterwards, the Moors took control of the city for centuries. Today, it is one of the most interesting touristic cities in Spain.

The city of Salamanca is featured with its wonderful historical sites that include the University, which is one of the most ancient in Europe. Established in the 12 th century, the university largely flourished during the 13 th century. There are also several other marvelous historical sites that grab the attention of numerous tourists who visit Spain 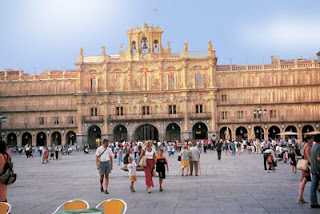 Posted by Right Travel at 5:32 PM No comments: